Five of the world’s seven species of sea turtles make their home in Hawaii’s waters, including the green sea turtle (honu), hawksbill (honu‘ea), leatherback, loggerhead, and olive ridley. The green sea turtle is by far the most commonly encountered sea turtle on Hawaiian reefs, followed by the hawksbill. Olive ridley, leatherback, and loggerheads are typically found in deeper, offshore waters and are rarely seen by the average ocean-goer. On Maui, sea turtles are a favorite discovery of snorkelers and divers on the island’s South and West coastlines.

Snorkeling with Sea Turtles in Maui

While marine species are often unpredictable, turtle sightings are nearly guaranteed during tours at our South Maui Turtle Town location.  While snorkeling in Maui, you can often spot green sea turtles lying on the ocean floor, eating algae, or visiting their local ‘turtle cleaning station’. The first time people hear the term ‘cleaning station’ they envision a little car wash with turtles lined up to cruise through. Sounds cute, but the turtle cleaning station is actually an area where sea turtles seek out fish who eat the algae off their shells. Sea turtles usually come up to the surface to breath, and can also be found on Hawaii beaches basking and resting. When swimming with sea turtles in Maui, remember to keep your arms at your side and remain at least 15 feet from turtles and look don’t touch. Harassing sea turtles in any way is illegal in the state of Hawaii. Violators can be fined up to $100,000 per violation and receive jail time for interference with the turtle population. Since sea turtles must come up to the surface of the water for air, it is important not to hover over them for long periods of time. A sea turtle could feel too scared to come to the surface to breathe and eventually drown. If you remain calm and respect a sea turtle’s space, you might just be rewarded with the turtle sticking around.

Now that you know how to view the turtles, read on to learn more interesting facts about sea turtles in Maui. 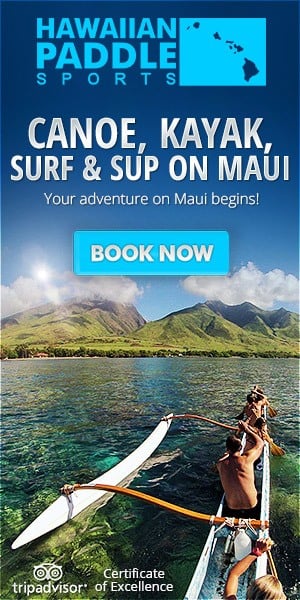 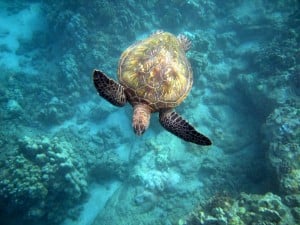 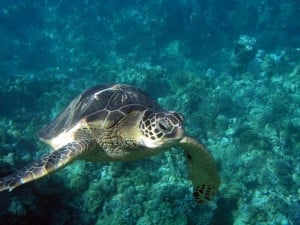 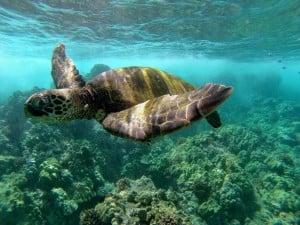 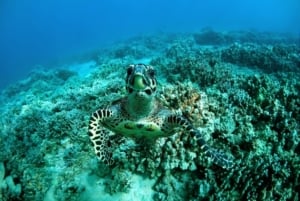 The most common sea turtle species in Hawaii is by far the Hawaiian green sea turtle (honu). They are regularly found resting under underwater ledges, basking on beaches, and nibbling on algae in shallow waters. The average shell length of an adult honu is 4-5 feet long and weight of 250 pounds, although they can grow as large as 500 pounds.

Despite their name, green sea turtles do not actually appear “green” – at least from the outside. Instead, the name “green” comes from the color of their internal fat tissue, which is green due to a diet that primarily consists of algae. Green sea turtles are commonly seen calmly cruising Maui’s reefs, but when spooked can reach speeds of up to 20 miles per hour.

In addition to feeding and resting, honu in Hawaii can also be observed basking on select beaches.  This behavior, thought to be a way to conserve energy or boost body temperature, has only been witnessed in Australia, the Galapagos Islands and Hawaii. Though watching sea turtles on the beach is a unique way to witness sea turtles in their natural habitats, please keep a respectful distance of >15 feet while quietly watching them and refrain from using bright lights or flash photography.

More than 90% of Hawaiian green sea turtles nest in the Northwestern Hawaiian Islands in the Papahanaumokuakea Marine National Monument. If you’re a Maui turtle, that’s a ~650 mile swim, one way! It takes turtles about one month to swim there and another month to swim back, so they don’t nest or migrate to mate every year. Depending on their health and age, they make this journey every 2-7+ years.

Male and female honu can both be found in the Main Hawaiian Islands, but their gender can’t be determined unless the turtle is of breeding size (>3 ft shell length). Males have a longer, thicker tail that extends past their back flipper, in addition to a more evident claw on each of flipper, which is typically used for holding their position during mating. 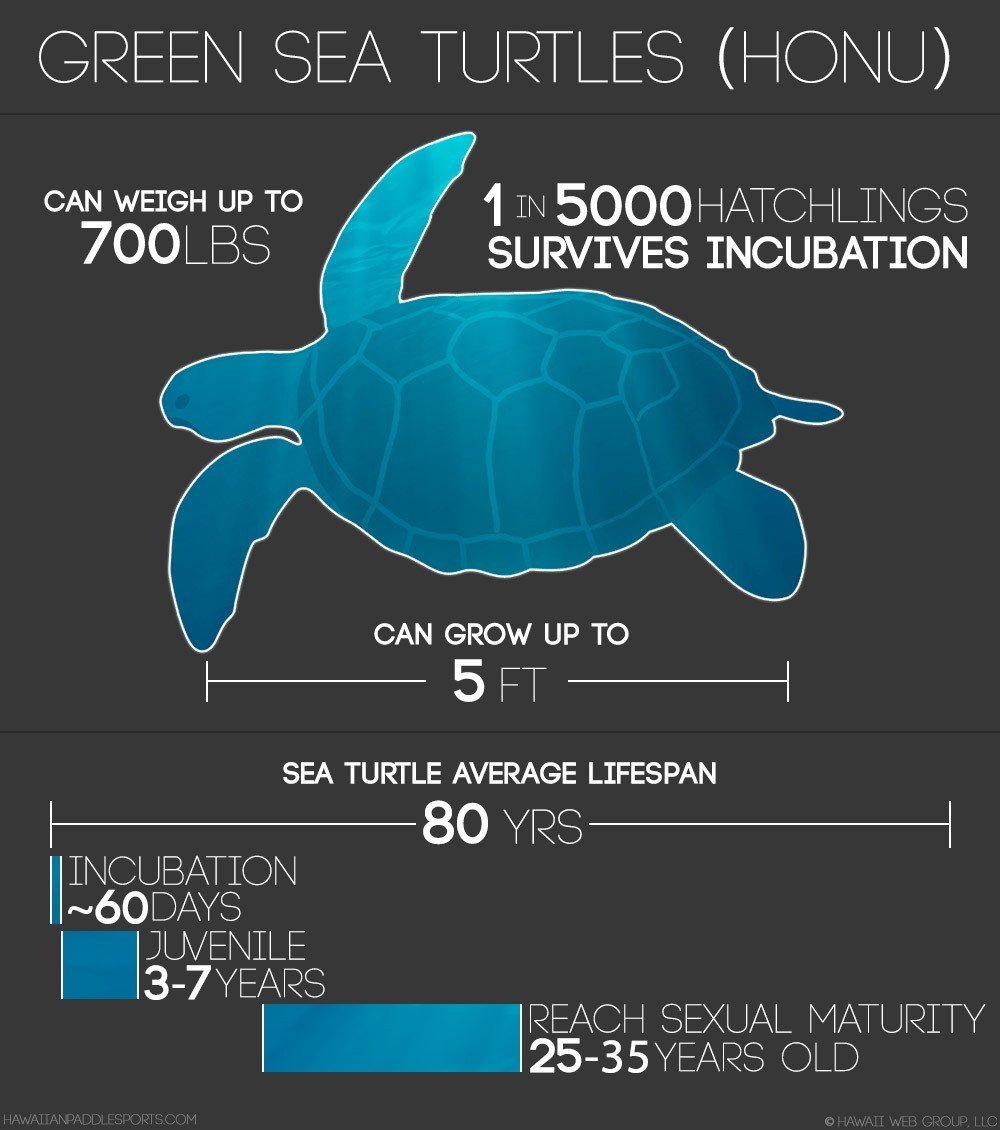 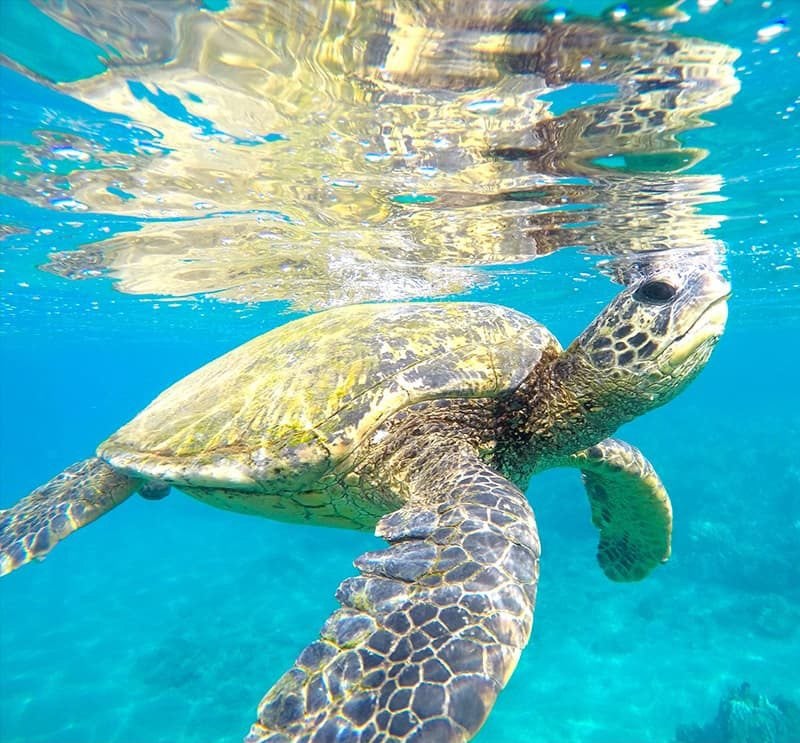 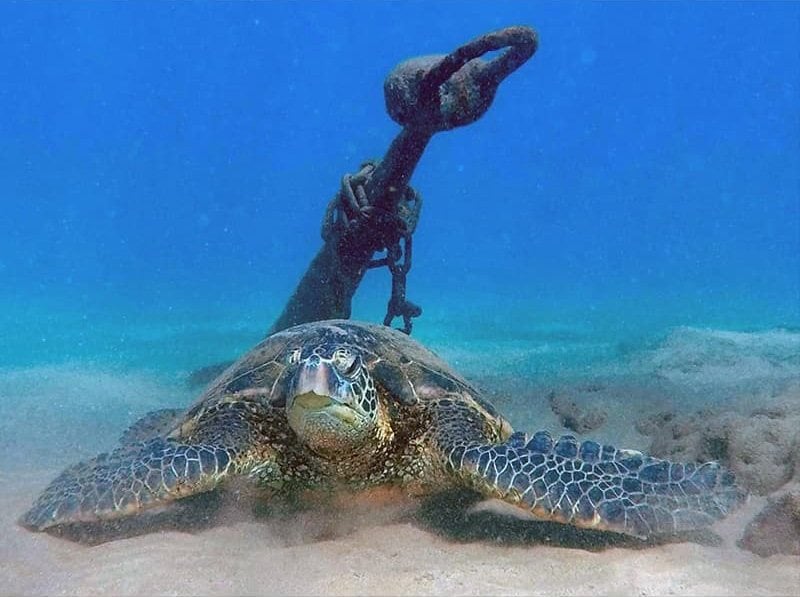 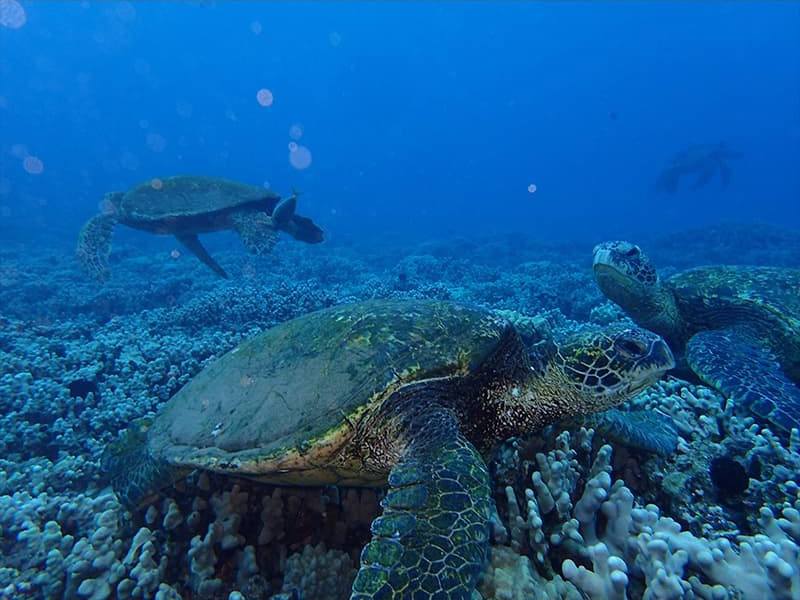 Hawksbills are named for their pointed, “hawk-like” beak that is used to extract food, particularly sponges, from the crevices of coral reefs. In addition to sponges, hawksbill also dine on marine algae, squid, sea urchins, fish, and jellyfish. They are considered one of the smaller species of sea turtles, reaching up to 4 feet in length and ~200 pounds.

As with the honu, hawksbill nest every 2-7+ years and lay between 1-5 clutches per nesting season, averaging 180 eggs per clutch. Nesting can begin as early as May and lasts until October, although hatchlings can emerge as late as December.

Unfortunately, hawksbills are considered a critically endangered species throughout most of their range. They are still harvested in many parts of the world for their prized shells (tortoiseshell), which are used to make decorative items and jewelry. Nests are also often poached for eggs. In Hawaii, hawksbills are much less commonly seen than honu, and despite similar protections, have not experienced the same population rebound.

Hawaiian Paddle Sports employees participate in volunteer programs to help protect the future of the hawksbill sea turtle. Volunteers monitor beached in shifts during nesting season. When a hawksbill nest has been laid, it is blocked off. As a nest gets closer to hatching, volunteers monitor the nest round the clock. Volunteers protect the nest from predators such as feral cats, dogs, crabs and even people. Their presence is also a way to connect with the community and educate them about the critically endangered hawksbill sea turtle. To learn more about how we partner with Hawai Wildlife Fund, check out our blog post. 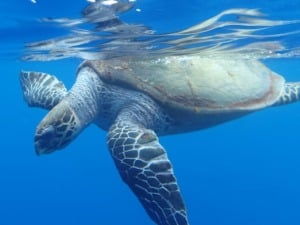 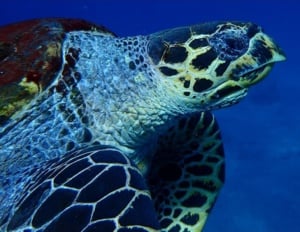 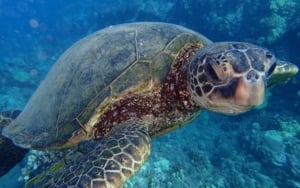 To an untrained eye, hawksbill and green sea turtles can look very similar. There are, however, a few insider ways to tell the difference between the two.

Keep in mind, though, that 99.99% of the sea turtles that you’ll see while snorkeling or diving on Maui will be green sea turtles. If you are lucky enough to see a hawksbill, you can contribute your photograph to www.HIhawksbills.org.  You’ll learn all about the history of the individual you saw, or you can name it if it’s a new individual to this research project! 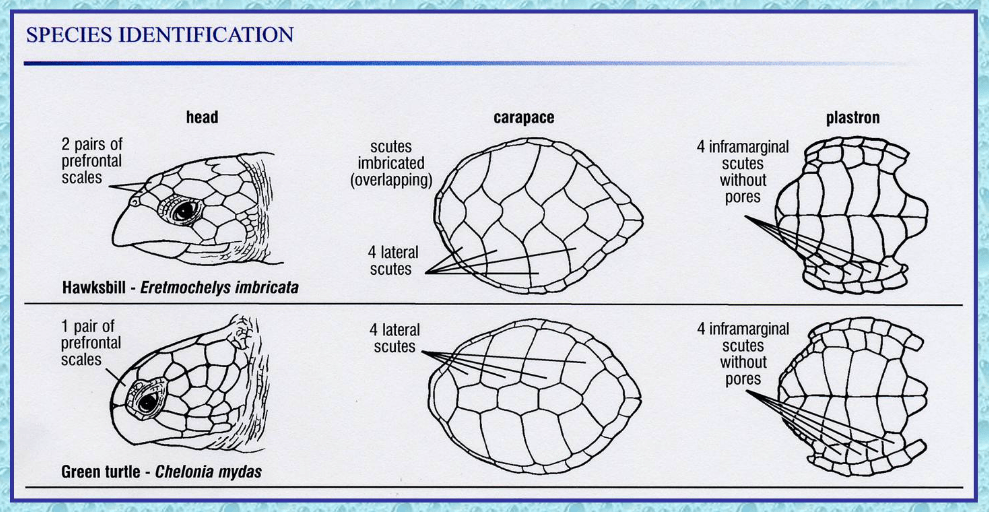 The Life of Sea Turtles

Sea turtles have been around for more than 150 million years, long enough to watch dinosaurs evolve and go extinct. As marine reptiles, sea turtles spend the majority of their lives in ocean. Females come ashore to lay their eggs, and some turtle species will also bask on the coastline. Sea turtles are expert navigators and often migrate thousands of miles between feeding grounds and nesting beaches.

Every sea turtle starts out as a small egg, about the size of a ping pong ball. Once eggs are laid, they will incubate in the sand for about 60 days before hatching. Baby sea turtles, known as “hatchlings”, typically emerge from the nest at night to make their way to the ocean. Before even reaching the water’s edge, hatchlings are easy prey for sea birds, crabs, rats, cats, dogs, and mongoose. Once in the ocean, they face a whole new host of challenges, including fish, sharks, and humans. In fact, scientists estimate that only 1 out of every 5,000 hatchlings will reach adulthood.

The early years of a sea turtle’s life are spent in the open ocean, away from the higher density of hungry predators near shore.  Juvenile turtles will spend the first 7-10 years of their life adrift in ocean currents, eating and growing as fast as they can. For Hawaii-born turtles, these juveniles will eventually return to the protected shoreline areas of the Hawaiian archipelago to live out the rest of their lives. Sea turtles are long-lived species, and do not reach sexual maturity until about 20-30 years of age. Through a new methodology called “skeletochronology”, scientists have found that green sea turtles can live to be approximately 80 years old. This methodology is the only way to determine a sea turtle’s age, so no one can tell how old a live sea turtle is. The size of a sea turtle is determined by its diet and health, not its age. 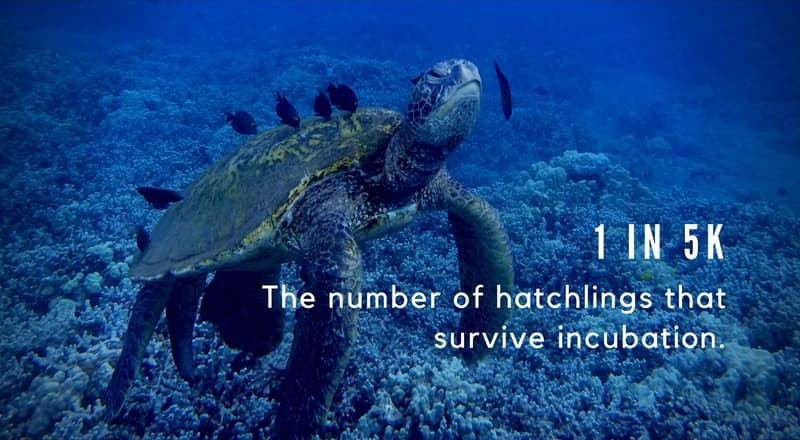 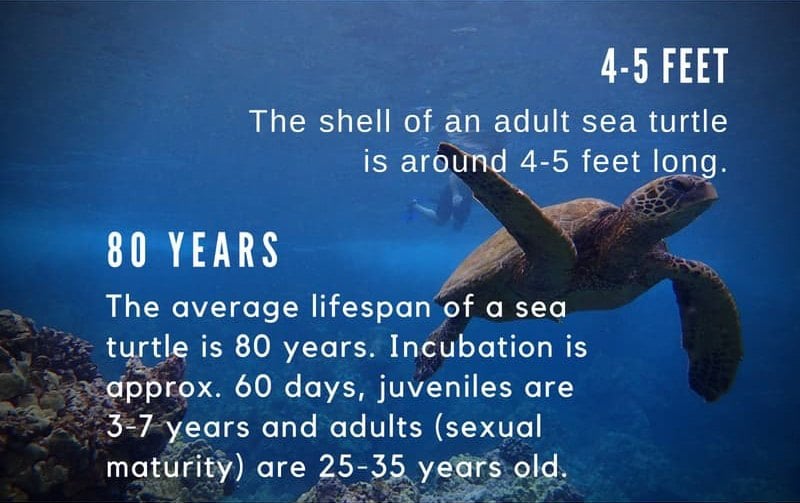 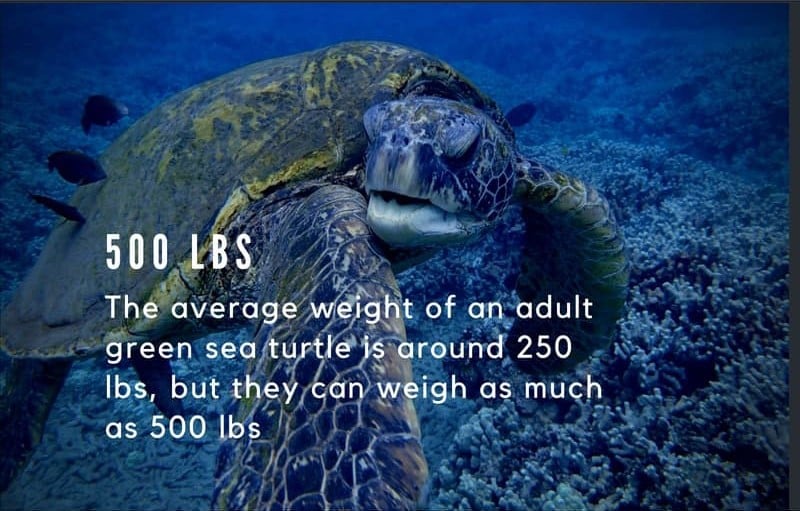 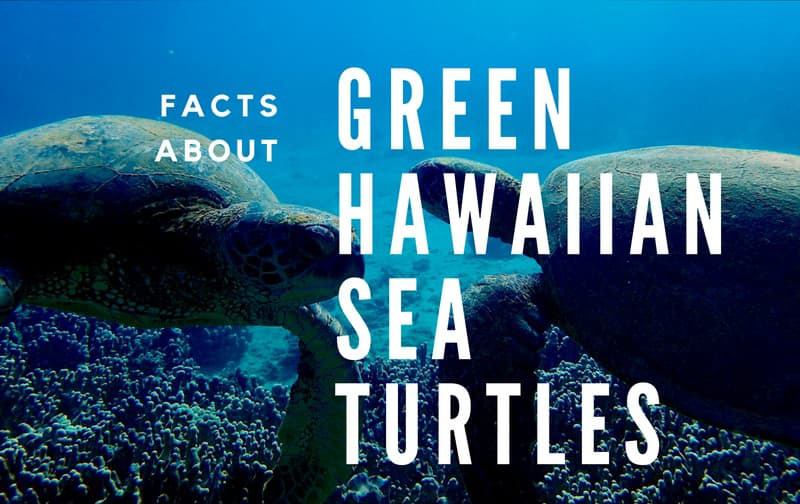 Sea turtles have played an important role in Hawaiian culture for hundreds of years. Both honu and honu`ea are mentioned in the Kumulipo, the Hawaiian creation chant. Sea turtles were utilized in traditional ceremonies and some families considered them aumakua (family spirits). Turtles were also used for many everyday purposes – tools, jewelry, utensils, containers, medicine, and food, among others. The harvesting of sea turtles and turtle eggs was carefully controlled by local chiefs and the kapu system. 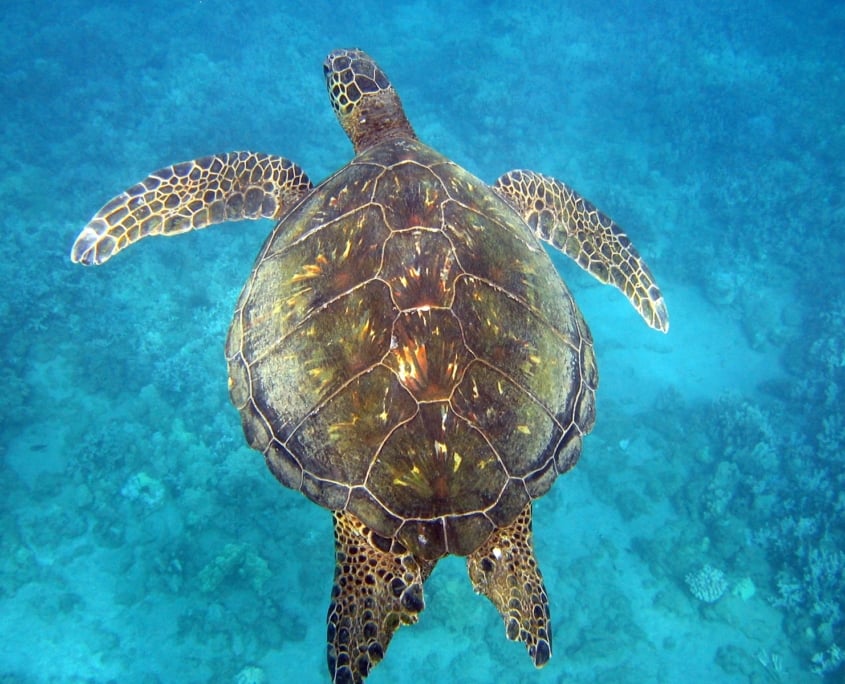 Why Are Sea Turtles Endangered?

Once considered in real danger of extinction, Hawaiian green sea turtles have seen a dramatic increase in the population under the protection of the U.S. Endangered Species Act. Hawaii’s hawksbill population has not fared as well and continues to remain a critically endangered species.

For more information about sea turtles in Hawaii, check out NOAA’s Sea Turtle page or Hawaii Hawksbills. During hawksbill nesting season, Hawaii Wildlife Fund keeps round-the-clock watch on hawksbill nests to ensure that the greatest number of hatchlings are able to reach the ocean for a shot at survival. Hawaii Hawksbills also promotes sea turtle science, education, and conservation in the Hawaiian Islands. 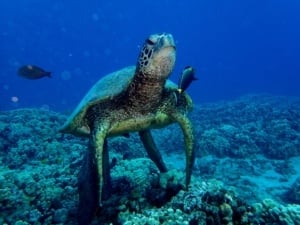 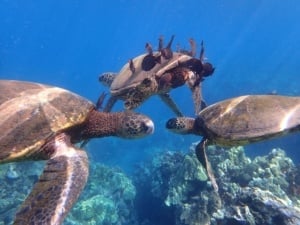 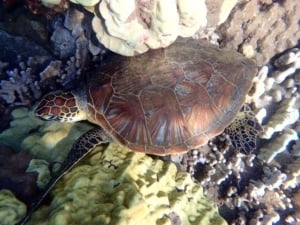 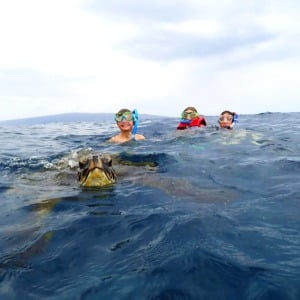 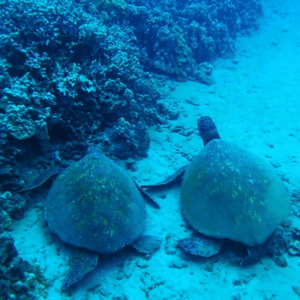 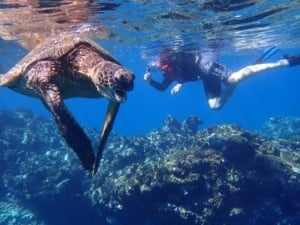 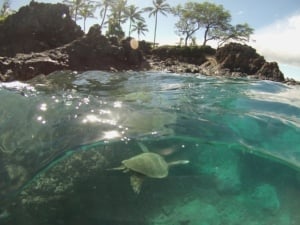 Where to see sea turtles in Maui 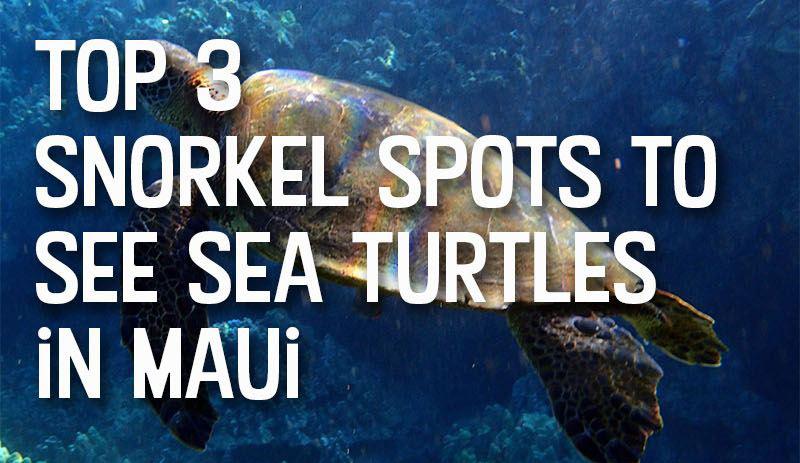 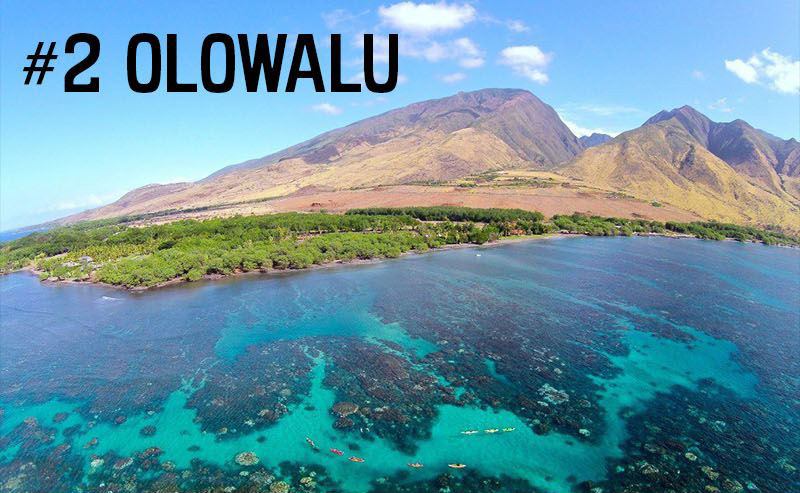 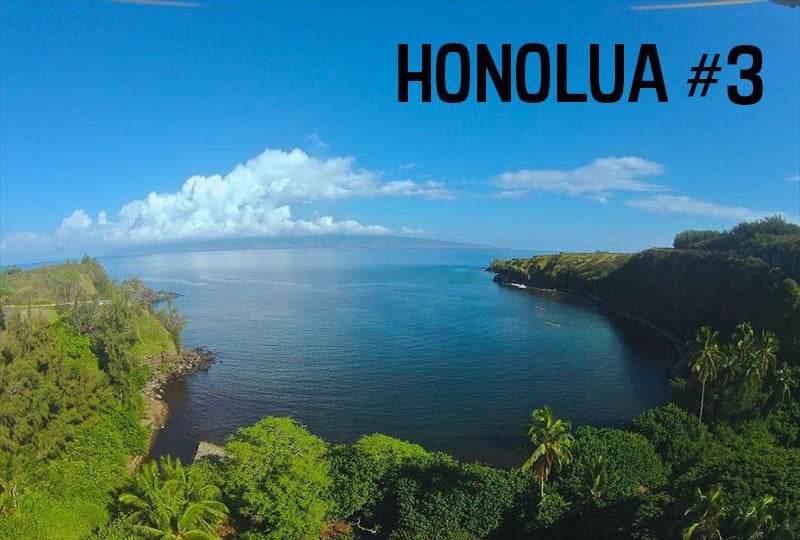 Interested in booking a sea turtle tour in Maui? Check out a variety of ways you can enjoy seeing sea turtles with Hawaiian Paddle Sports!